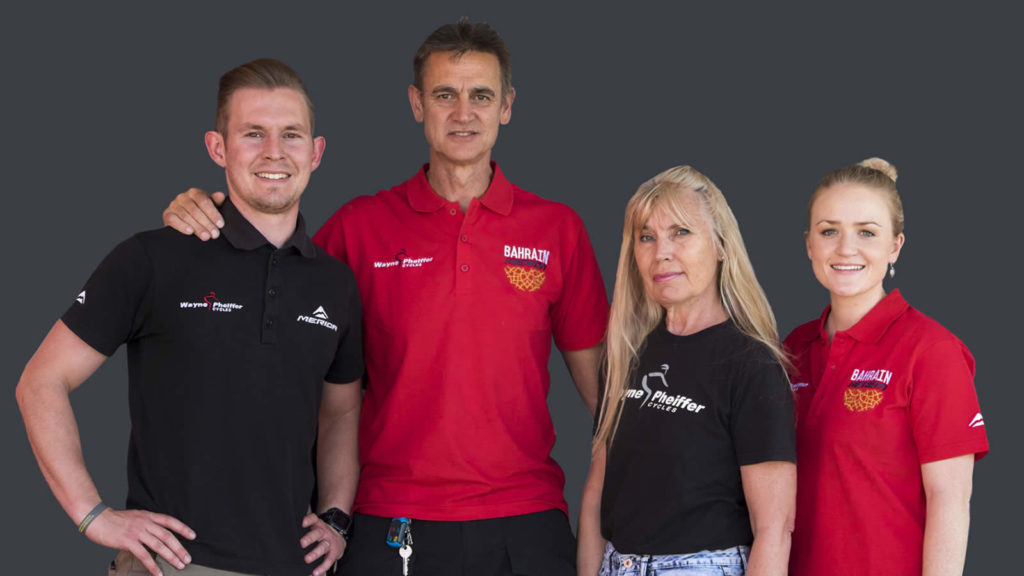 In June 2006, Port Elizabeth’s well-known Springbok Cyclist and World Sprint Champion, Wayne Pheiffer, and his wife Julie, bought Webb’s Cycles from John Webb, who was retiring after 37 years.  This was the start of Wayne Pheiffer Cycles.

Keeping things simple and combining a passion for cycling with a commitment to putting customers first, has been the path to success for the Pheiffer Family.

Together with their son, Brent and his wife Kirsten, they have recently opened a second store in Humewood, which they all play a huge role in, keeping the business a success.

Wayne has an experienced, qualified, professional team assisting him.

His two sons Brent and Shane have also competed locally and internationally, having the knowledge and experience that will keep you ahead of the bunch. Brent is a co-owner and manages the Humewood store. Shane, their IT/Tech savvy guy!  Julie handles finances, HR and marketing and Kirsten manages the coffee shop and therapy room. We all have different strengths and talents which we have tapped into.

Being a family run business, we firmly believe in building relationships and understanding the need of each client, above sales and income. We try our absolute best to add a personal touch and focus on attention to detail in every sale we do, as we believe each client is different and needs their individual requirements met.

Our customers have not only become part of our cycling community but have become friends and family!

At 58 years old, Wayne Pheiffer may be the “baby” of the Legends of the Pedal bunch, but with a world championship gold medal, more than 50 national titles and 15 Springbok caps has certainly earned him his place among SA’s Cycling Legends.

Although, if his parents had had their way, the Port Elizabeth rider would never have sat on a bicycle in the first place.

“I was never allowed to have a bicycle in town. My parents grew up in the Karoo and thought it would be too dangerous.”

It took until his Standard Seven (Grade Nine) year to finally wear them down. “They eventually relented and bought me a bicycle to commute to school with.”

Taking to cycling, was like the proverbial ‘duck to water’ and Wayne’s thoughts soon turned to racing.

“I wanted to go to a beginner’s race at the Scribante motor racing track, so I asked my dad if I could and he said, ‘Not a chance!’”

Being a teenage boy, he promptly found another way….

“I went to ‘play’ at a friend’s house that Saturday and ended up at the racing with him. I took part and won!”

After the elation subsided, the panic began to set in as he contemplated how he would explain the trophy and R60 prize money to his father?

“But, when I walked away from the rostrum, my dad was standing right there. He knew I would find a way, and where I would be!”

From then on, my parents supported me wholeheartedly throughout my career.

With Wayne’s younger brother, Roger, and sons Brent and Shane all going on to represent their country on the road and track, the Pheiffer family is now synonymous with the sport.

Wayne’s passion for the speed and power of track clearly remains undiminished since first obtaining junior national colours in 1979. He says the highlight of his own career was undoubtedly being crowned world masters sprint champion in Manchester in 1996.

“Winning a world title overseas and seeing your South African flag go up does bring a bit of a lump to your throat,” he says.

Riding the legendary Hansom bikes as a sponsored cyclist, Wayne continued to take gold on the track in the summer and compete on the road in winter.

In 1988, he was forced to withdraw from his second Rapport Tour after his wife Julie was involved in a horrific car accident that kept her hospitalized for two months.

“Julie had done a lot of my training with me. I would train after work and she would follow me in the car till 10pm at night, just so that I could get the mileage in to be able to ride those tours.”

But she was more important to me than any tour. I stayed at her bedside praying night and day.

As a well-known freelance TV presenter on Graffiti, Breakfast Tv and Video 2, Julie’s coaching also proved invaluable when Wayne was called in to do on and off the bike television commentary during the Allied Cycle Tour.

“She was very strict about the speed I had to speak at and the tone I had to maintain.”

To get a feel for the action, the film crew would drop him on top of a hill, so that he could cycle amongst the riders, with the camera.

“Those days you didn’t have a Go-Pro, you had this big, heavy camera strapped under your bike. It wasn’t exactly comfortable to ride with . . .but offered amazing action footage for viewers.”

Unfortunately, Julie’s accident was not the only medical setback the couple has faced over the years.

“I’ve broken my collarbone five times, my neck, my wrist and ribs. It sounds like a lot of breaks but that’s spread over almost 40 years of racing”.

But the real test came when Wayne was diagnosed with cancer of the left kidney 18 years ago.

“That was a huge curved ball,” he admits. “There were also lymph nodes involved.”

After surgery and “a lot of prayer”, Wayne believes he received a miracle.

“I’ve been clear since then and to this day the doctors can’t explain why the cancer disappeared from the lymph nodes. “I’ve since toned down the riding to protect the other kidney. I don’t do long-distance races or tours where you are continuously hammering your body anymore.”

However, he still clocks about 60km every other morning before opening the shop, which he took over from another local institution, John Webb. “John was here for 37 years and ran a small, tight ship. He taught me everything I know.”

“We’ve grown the shop tremendously and now have a second store, it’s still exciting for him to come in and see the developments.”

It is that innate sense of loyalty and staying power that has served Wayne well through life’s ups and downs.